With the COVID-19 pandemic causing a surge in support volumes globally, Intelligent Virtual Assistants (IVAs) are fast becoming the go-to choice for the businesses to cater to support requests. Enterprises are evaluating multiple Natural Language Processing (NLP) based IVA vendors to achieve automation, but feel perplexed in making a choice amongst a plethora of vendors, with each vendor claiming to have the ‘highest automation’ or ‘highest cost savings’. However, there is more to the IVA story than automation, with a key aspect being how an IVA handles “Out-of-scope queries”.

Here’s a visualization of both the concepts:

However, customers that visit the website or mobile app may/ may not have prior knowledge about the IVA’s scope. It’s reasonable to expect users to ask certain queries which are outside the IVA’s SCOPE.

Thus, while evaluating a conversational AI vendor, businesses should pay adequate attention to the robustness of the NLP model and its ability to identify out-of-scope queries.

It is a good idea to always keep in mind these words:

Answering out-of-scope queries by misidentifying them as in-scope, can potentially harm customer experience. Since an IVA also serves as an official communication channel for the brand, it may cause customer churn or reduce brand credibility.

Listed below are a few instances showing the dent caused by IVAs that are unable to identify out-of-scope queries and continue to reply to the user. 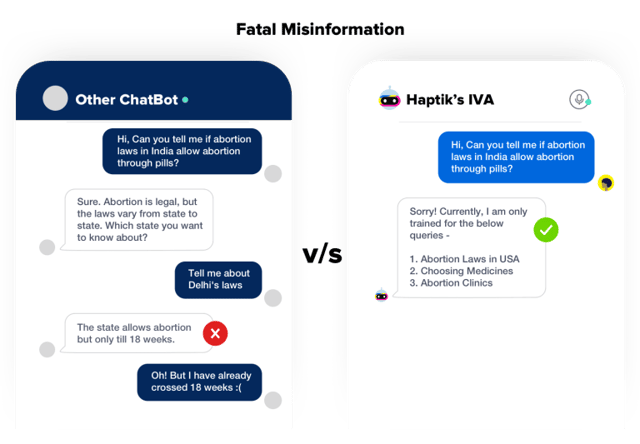 For instance in the above example, the IVA was trained to answer queries on abortion laws of USA. However, it couldn’t recognise that the user’s query is regarding Indian laws and ended up giving a fatally wrong answer. 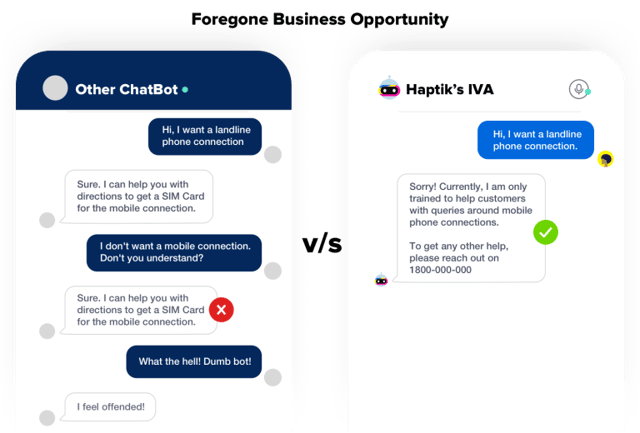 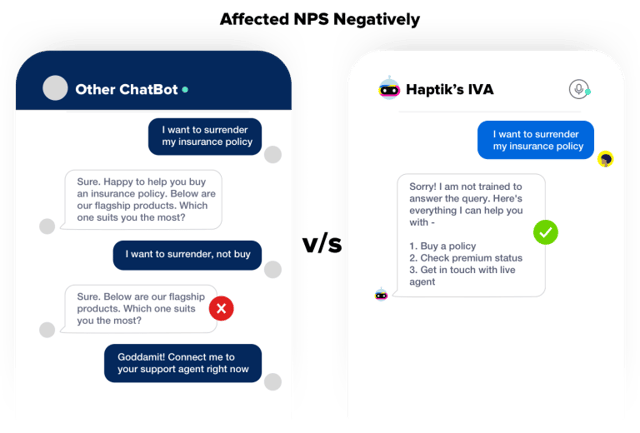 At Haptik we understand the gravity of rightly comprehending IVA scope and the immense damage caused by an IVA that answers out-of-scope queries. Thus, while building and implementing our NLP algorithms, we put a distinct and intentional focus on correct identification of out-of-scope queries.

Recently at EMNLP 2019, one of the most prominent conferences on NLP, a publication evaluated a few platforms and models on their performance in identifying out-of-scope queries. Most vendors present in the industry use one or a combination of these models to power their IVAs.

GRAPH 2 shows the performance of various models and platforms when Training Data is reduced to a sixth of the original Training Data.

Chatbot vs. Intelligent Virtual Assistant: 9 Ways to Tell the Difference
Understanding Bot Breaks, and How to Handle Them